Copyrights © 2017 Chefreetu Uday Kugaji. All Rights Reserved.
Sign up with your email address to be the first to know about new products, VIP offers, blog features & more.

In Sanskrit it is known as Haridra, also has more 53 names.

Turmeric has originated in the in Southern India. A wonder and Powerful spice indeed.

Erode, a city in the South Indian state of Tamil Nadu, is the world’s largest producer of and the most significant trading center for this golden spice, also Erode is known as “Yellow City,” “Turmeric City”. Sangli, a city of Maharashtra, is second only to Erode in size, production and trading for turmeric.

Turmeric is not only used as a cosmetic, beauty aid but also as a spice and medicine.

It is an anti-oxidant and anti-inflammatory. It is used to aid digestion. Used as an antiseptic for burns, cuts and wounds.

Used in many Indian traditions and ceremonies, it is considered pure especially in Prayers, Religious Rituals and marriage ceremonies.

Culinary uses of Turmeric , manufacturing food products such as canned beverages, dairy products, baked products, ice cream, yellow cakes, yogurt, sweets, cake icings, cereals, sauces, and gelatins. It is a substantial ingredient in most commercial curry powders. Turmeric has numerous uses in Asian cuisine. It is used both in savory and sweet dishes, and is widely used in Eastern specialties such as fresh turmeric pickle.  It is used as a preservative and as a margination in many dishes. It is a natural food coloring which imparts beautiful yellow colour and robust peppery flavor to the food dish in which it is used. Lost recipes of India include Haldi Ka Halwa.

Dadi Maa ke Gharelu Nuskhe which simply means Grandmothers quick Tips includes Golden milk that is Haldi Doodh, mix Turmeric with Mustard oil and Salt and apply, you will get relief from tooth ache, suffering from cold, mix Honey, Turmeric and Black Pepper and consume it.

This golden mystic health drink is a medicinal milk which is Ayurveda –inspired, contains turmeric and has anti-inflammatory and anti-oxidant properties. Cures cough, cold and helps reduce weight. 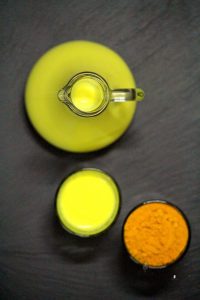 Soup for the Soul, is prepared with the goodness of Coconut milk, coconut cream, turmeric, flavored with ginger, seasoned with salt and freshly ground pepper drizzled with coconut oil.

In a heavy bottomed non-stick pan add all the ingredients i.e. Coconut Milk,

Add salt and pepper to taste.

Heat the coconut oil and drizzle over the soup.

What do you think? Cancel reply

I believe that the food that I cook / prepare should not only touch the hearts but also the souls of the people relishing it.